Let me start by saying that I love – LOVE – our German Shepherd Bailey.  She is the best dog I have ever had and the older she gets, the more precious to me she becomes.

That being said, when Bailey was about two years old, we were told that she would need surgery to repair what equates to a torn ACL in humans.  The first surgery was around $2200 – NO KIDDING.

Yep, I said the first surgery.  About a year later her other back leg went out so what were we to do?  We got the surgery done on her other leg as well. *gulp*

For being a 100+ lb dog, and for being ten years old now, she is more active than I ever would have imagined her being at this point in her life – two replaced knees and all. 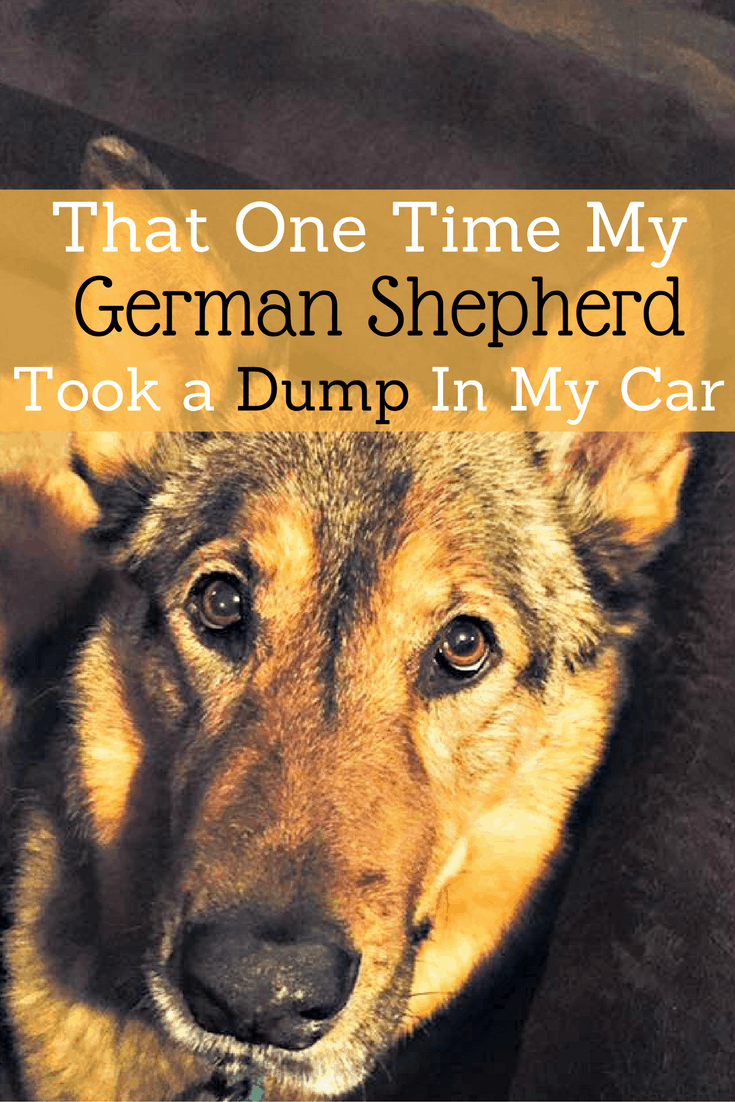 At that time, our oldest child was two years old.  On one side of the backseat of my tiny little Chevy Cavalier was his car seat, and as we also had a four week old baby, his monster of a car seat was situated on the other side.  Two weeks after Bailey’s surgery, we went in for her first checkup – Paul was blissfully unaware of my struggle, as he was working that day. How fortunate for him.

After dropping our two year old off at daycare (cause I’m not THAT brave) there’s me, my four week old baby and Bailey, the 100 pound German Shepherd cruising down the road on the way to vet.

Trying to drive nice and smooth – slow turns, you know – as to not force her to use that back leg. We get a mile or two down the road from the daycare and Bailey seriously pops a squat and starts pooping – right there on my front passenger seat.

So there I am, frantically trying to get her to stop pooping (as if!) as I gingerly pull into the Kmart parking lot. Behind the Kmart, there’s a strip of grass.

She is excited to get out of the car to finish her (practically finished) business, and as she jumps around and twists and turns, she gets the poop deep into the webbing of her toes… as she jumps all over the inside of my car. She’s grinding it into the upholstery of my seats.

In that small strip of grass behind Kmart, she finishes her business – which consisted of two tiny little turds at this point. This means that the majority of her {German Shepherd sized} poop is in my car. My upholstered car. 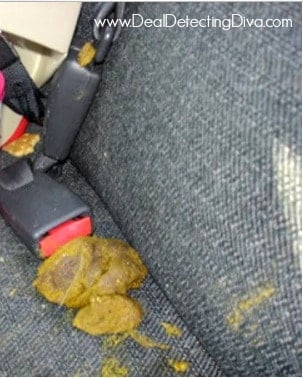 I desperately search my car for something – ANYTHING – to pick up the chunks of dog poop now decorating the seats. I had nothing. NOTHING!!!

How does this happen?

In her attempt to flee the vehicle, she had danced all over MY seat as well.  With nothing for me to sit on and nothing to clean it up, I was faced with the prospect of entering the the vet’s office with dog sh*t on my pants you guys.

So I… rolled up my sleeves and tried not to puke.

It was the fall apart kind of grainy dog poop that you can’t just pick up, you have to really get a hold of it. I got it under my finger nails.  I was crying, struggling to breathe as I forced the bile back down my throat.

After I had fully ingrained her dukey under my own fingernails, and as we were almost ready to start driving again, she decided to jump into the back seat.  😐

Two car seats, one on either side, and nowhere for Bailey to go. Not side to side, not backwards. So, I jumped out and unbuckled the two year old’s car seat as quickly as I could manage. She at least had space to sit back there… her and her poop-encrusted paws.

Finally we get to the vet… late of course. I furiously scrub my hands in the tiny little sink so as to not smell like literal dog crap when the vet comes in.  Her incision looks fine. Great news!  My back side, however, is still smelling like I crapped my own pants.

I packed up the newborn and headed with Bailey back to the car. As soon as I opened the door I could smell the horrible stench. I start to cry. Then I started to sob. Then I called my sister.

While waiting for her to answer, I tried to calm myself down, tried to take a few deep breaths. And I almost died. 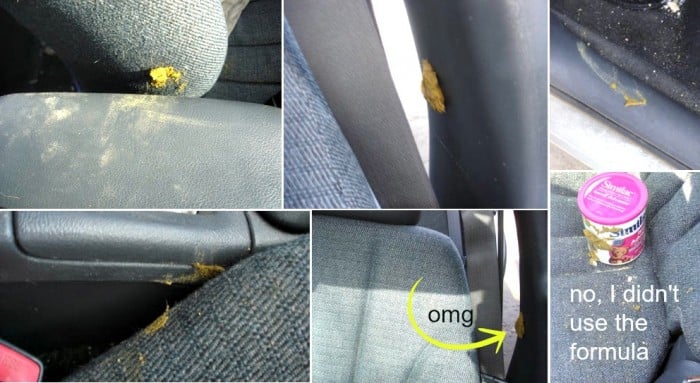 I sobbed all the way home to my sister, telling her everything, and how it was OK if they thought it was funny, cause someday I would too. That day is today. And yes, that’s her poop by my seat belt.