I belong to a book club at my local library.  A fantastic bunch of ladies that meet once a month to talk about what new books we have been reading recently, to share what books are on our Goodreads queues.  We don’t always stick to the topic at hand.  Sometimes we didn’t get the chance to finish (or perhaps even start) the book but we always enjoy each other’s company and it’s a chance to get out of the house for an hour a month.

If you’re not a member of a book club, you should be!

This month, I asked the ladies what books they have read this summer/fall that they would recommend.  Some of these I have read myself, and some I have not.  I trust the opinion of these ladies implicitly, so I’ll go ahead and list all of the books they recommended – that I have since added to my own Goodreads queue. Friend me, yo! 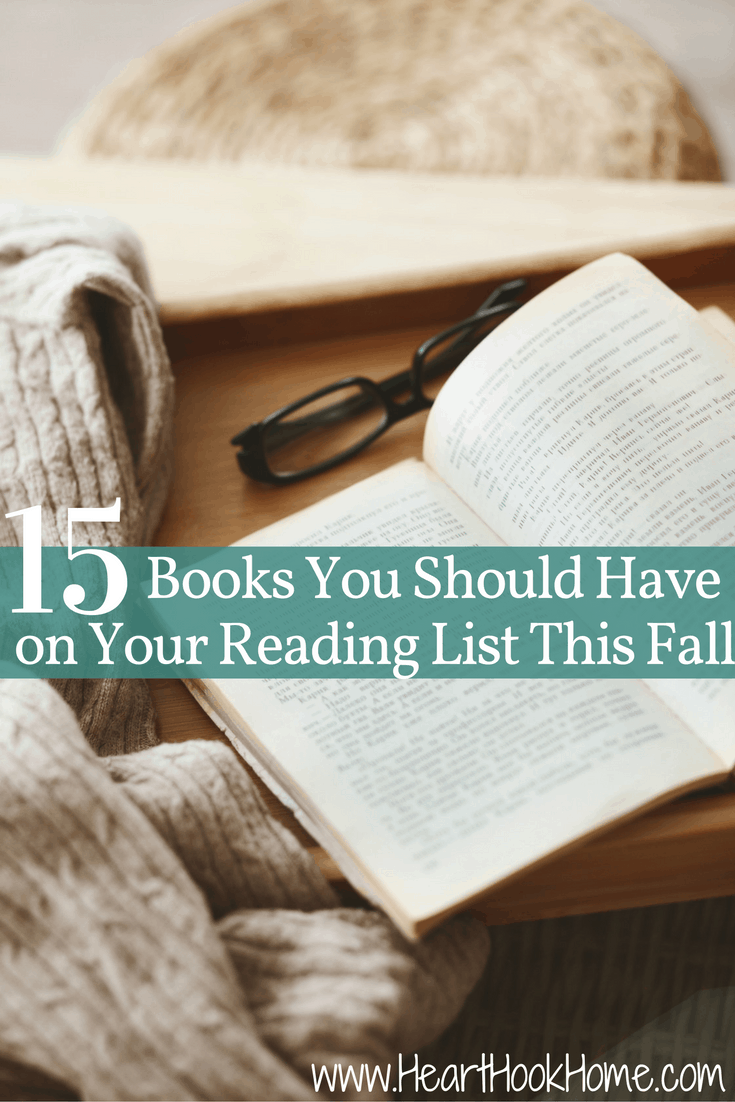 15 Books You Should Have on Your Reading List this Fall

In The Night Circus, the circus arrives without warning. No announcements precede it. It is simply there, when yesterday it was not. Within the black-and-white striped canvas tents is an utterly unique experience full of breathtaking amazements. It is called Le Cirque des Rêves, and it is only open at night.

Written in Red came highly recommended.  Sounds kinda creepy, but I’m going to give it a try! As a cassandra sangue, or blood prophet, Meg Corbyn can see the future when her skin is cut—a gift that feels more like a curse. Meg’s Controller keeps her enslaved so he can have full access to her visions. But when she escapes, the only safe place Meg can hide is at the Lakeside Courtyard—a business district operated by the Others.

The Fate of Mercy Alban

I have read this book myself.  Not once, but twice! The Fate of Mercy Alban was a great, quick read with lots of twists and turns.

Long-buried family secrets, a packet of old love letters, and a lost manuscript plunge Grace into a decades-old mystery about a scandalous party at Alban House, when a world-famous author took his own life and Grace’s aunt disappeared without a trace.

I have not read Dark Places (yet!), but it sure looks like a page turner.

Libby Day was seven when her mother and two sisters were murdered in “The Satan Sacrifice of Kinnakee, Kansas.” She survived—and famously testified that her fifteen-year-old brother, Ben, was the killer. Twenty-five years later, the Kill Club—a secret society obsessed with notorious crimes—locates Libby and pumps her for details. They hope to discover proof that may free Ben. Libby hopes to turn a profit off her tragic history: She’ll reconnect with the players from that night and report her findings to the club—for a fee. As Libby’s search takes her from shabby Missouri strip clubs to abandoned Oklahoma tourist towns, the unimaginable truth emerges, and Libby finds herself right back where she started—on the run from a killer.

A Gentleman in Moscow

One of the ladies in book club highly recommends A Gentleman in Moscow.

In 1922, Count Alexander Rostov is deemed an unrepentant aristocrat by a Bolshevik tribunal, and is sentenced to house arrest in the Metropol, a grand hotel across the street from the Kremlin. Rostov, an indomitable man of erudition and wit, has never worked a day in his life, and must now live in an attic room while some of the most tumultuous decades in Russian history are unfolding outside the hotel’s doors. Unexpectedly, his reduced circumstances provide him entry into a much larger world of emotional discovery.

Oh! I loved, loved The Witch’s Daughter.  I’ve read it three times now, and I’m thinking it’s time for a fourth. This includes time travel and magic and of course, witchcraft.

My name is Elizabeth Anne Hawksmith, and my age is three hundred and eighty-four years. If you will listen, I will tell you a tale of witches. A tale of magic and love and loss. A story of how simple ignorance breeds fear, and how deadly that fear can be. Let me tell you what it means to be a witch.

I have added The Selection to my Goodreads list.  This is the first book in a series, and I’m excited to start!

For thirty-five girls, the Selection is the chance of a lifetime. The opportunity to escape a rigid caste system, live in a palace, and compete for the heart of gorgeous Prince Maxon. But for America Singer, being Selected is a nightmare. It means turning her back on her secret love with Aspen, who is a caste below her, and competing for a crown she doesn’t want

In The Obsession, Naomi Bowes lost her innocence the night she followed her father into the woods. In freeing the girl trapped in the root cellar, Naomi revealed the horrible extent of her father’s crimes and made him infamous. No matter how close she gets to happiness, she can’t outrun the sins of Thomas David Bowes.

“Are you happy with your life?”  Those are the last words Jason Dessen hears before the masked abductor knocks him unconscious. Before he awakens to find himself strapped to a gurney, surrounded by strangers in hazmat suits. Before a man Jason’s never met smiles down at him and says, “Welcome back, my friend.”

In this world he’s woken up to, Jason’s life is not the one he knows. His wife is not his wife. His son was never born. And Jason is not an ordinary college physics professor, but a celebrated genius who has achieved something remarkable. Something impossible.

Not sure how I feel about White Trash Zombie, but it did come highly recommended.  I’ll have to give it a go.

Teenage delinquent Angel Crawford lives with her redneck father in the swamps of southern Louisiana. She’s a high school dropout, addicted to drugs and alcohol, and has a police record a mile long. But when she’s made into a zombie after a car crash, her addictions disappear, except for her all-consuming need to stay “alive”…

You can’t go wrong with a Janet Evanovich novel.  Curious Minds starts off as an inquiry about missing bank funds in the Knight account leads to inquiries about a missing man, missing gold, and a life-and-death race across the country. Through the streets of Washington, D.C., and down into the underground vault of the Federal Reserve in New York City, an evil plan is exposed.

Set in 1887 London, I do believe I’ll love A Curious Beginning.  After burying her spinster aunt, orphaned Veronica Speedwell is free to resume her world travels in pursuit of scientific inquiry—and the occasional romantic dalliance. As familiar with hunting butterflies as with fending off admirers, Veronica intends to embark upon the journey of a lifetime.

Vinegar Girl comes highly recommended from a trusted friend in book club. Kate Battista feels stuck. How did she end up running house and home for her eccentric scientist father and uppity, pretty younger sister Bunny? Plus, she’s always in trouble at work – her pre-school charges adore her, but their parents don’t always appreciate her unusual opinions and forthright manner.

All the Missing Girls

This new novel by Megan Miranda All the Missing Girls is written in reverse.  My book club leader Kristy couldn’t get enough of this one, so I’m putting it next on my list of books to read.

Like the spellbinding psychological suspense in The Girl on the Train and Luckiest Girl Alive, Megan Miranda’s novel is a nail-biting, breathtaking story about the disappearances of two young women—a decade apart—told in reverse.

I’ve actually read Moon Called, and it is both intriguing and a quick read.  Mercy Thompson’s life is not exactly normal. Her next-door neighbor is a werewolf. Her former boss is a gremlin. And she’s fixing a VW bus for a vampire. But then, Mercy isn’t exactly normal herself.

Do you like these roundups? I’ve already got a few books to throw on my next roundup, so I’ll continue to do them once per quarter. Be sure to friend me on Goodreads so we can compare notes! 😀