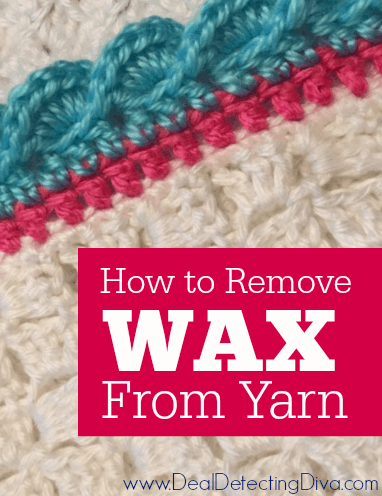 I spent five whole hours crocheting this baby blanket for a friend of mine.  I folded it nicely and laid it out perfectly to take a photo.  When I went to finish the edging of the blanket I about had a heart attack.

I had DIPPED the edge of the blanket in Scentsy wax!!

Oh…  I was SO MAD at myself when I noticed what I did.  Just about made me sick to my stomach – thankfully it was a clear wax, not green or red.  But still.  It was hard as a rock and I was mad. 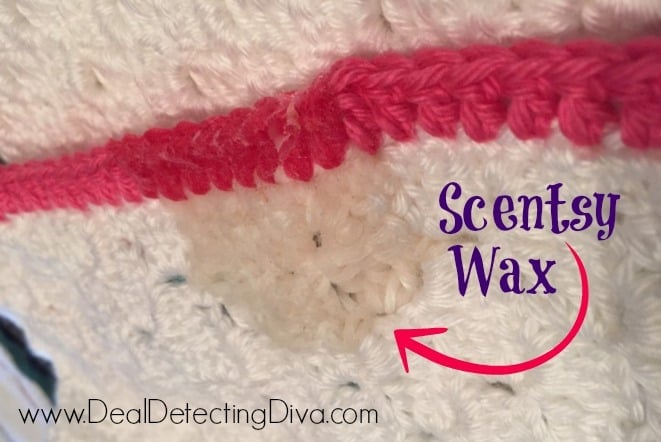 After some extensive Googling, I found that there’s not really a whole lot of advice on the internet for removing wax from yarn.  I figured I can’t screw it up any more than I already have, right?!  😐 ugh

I’ve heard the newspaper and a clothes iron trick, but I didn’t want any of the ink from the newspaper to transfer – if it would, and I wasn’t about to try it – so I decided to boil it instead. Yep, I poured boiling water right on it.

Came RIGHT out – if just a tad stiff after cooling and drying. 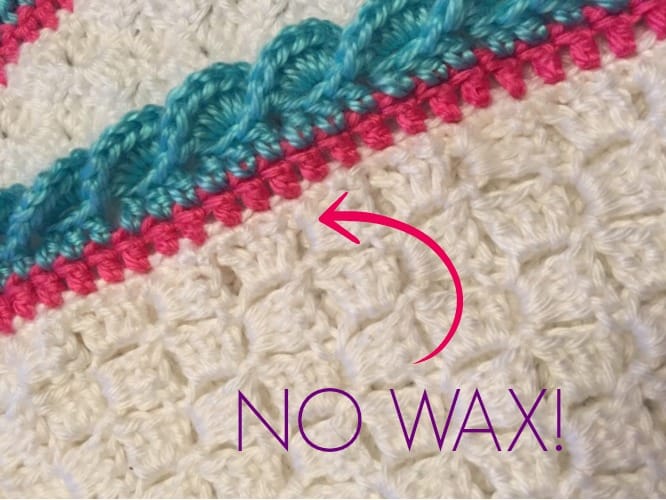 I boiled the water, and had a helper hold the blanket over the sink.  Pouring slowly, I made sure to focus on the wax-filled portion of the blanket.   I didn’t have enough water at first, so I went and boiled another pot. Repeated the process, let the blanket cool, then washed the next morning.

The part of the blanket that had the wax soaked in was a little stiff to the touch after washing – but MILES better than before! It was completely stiff and unusable – completely unmanageable before pouring the boiling water over it.  I couldn’t have finished the edging if I had tried!

Things I would have done differently:

I would have boiled more water – a FULL pot – so that I didn’t have to do it twice. Although that really wasn’t that big of a deal.

I’m assuming this stretching was a result of both the tight hold he had on the blanket as I was pouring, and the boiling water as it poured through the stretched fabric of the blanket.

Overall I am happy with the result! I feel comfortable giving it to my girlfriend, instead of chucking it in the trash.

If you’re wondering about the edging I used, you can see my tutorial for the reverse shell stitch right over here.