Babies.  The smell, the sweet softness of their skin, the endless newborn cuddles.  Who doesn’t love babies?

There must be something in the water because three of my girlfriends have given birth this week. As I flip through their photos on Facebook, “oooh-ing” and “awww-ing”, liking and commenting on all that sweetness, I notice that not one single person suggests a pulse oximetry test.  So, I’ve become “that” friend. 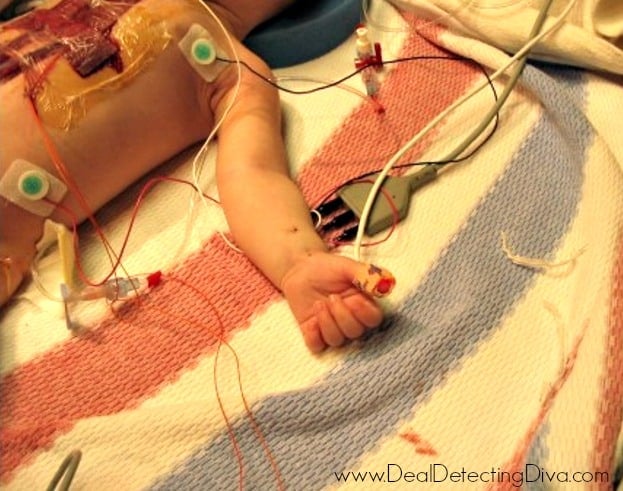 Pulse-Oximetry at Birth (I’m THAT Friend) + Why Isn’t This Standard Testing in ALL States?

Why? Because it could have prevented months of our stay in the hospital with our son, and possibly his second open heart surgery, and possibly an hour of CPR and possibly eight days on ECMO.

Are you familiar with pulse oximetry?  It is a painless, non-invasive and very inexpensive (less than $10!) test that measures the percentage of oxygen saturation in the blood, which helps to detect an array of health concerns of a newborn before they leave the hospital – including the most common birth defect and the number one killer: continental heart defects.

Did you know that 1 in 100 babies are born with some kind of heart defect – and statistically speaking, every single day a baby in the US is sent home from the hospital without a critical heart defect being detected, not to mention the non-critical defects. Why hasn’t this changed?

In a healthy baby (or human of any age) the ideal percentage of oxygen in your blood is 100% – meaning that your body is fully oxygenated.  We were told that anything above 93% is considered “good” for our son.  When we took him in (the day he got diagnosed) he was sitting at 74%.  Ouch.

This has to have something to do with his learning difficulties.

As a heart mom, I am baffled and yes, angry as to WHY pulse oximetry testing for newborns is not a requirement in every single state before they send you home.

When Caden (our heart child) was born, he weighed in at a whopping 9 lbs, 12.6 oz.  He was a big boy, and he passed his Apgar test – he was pink and appeared healthy.  At least healthy enough that his critical heart defect (Truncus Arteriosus) was not detected before they sent us home.

It was not detected at his first checkup at 2 weeks of age, nor was it detected at his second checkup at 6 weeks.  He developed a cough that prompted us to take him to urgent care when he was exactly two months old. We later learned that his cough was one result of him having 6x the amount of blood flow to his lungs than he needed.

He wasn’t eating well, he was tired all of the time – being a new mother I figured the sleepiness was just a “newborn thing” – and he was breathing rapidly, his stomach retracting up under his ribs and into the hollow of his neck with every intake of breath.

Had they tested his blood oxygen levels at birth, they would have noticed the percentage was low, would have ordered more testing, and as a result that could have prevented those first two months of poor eating, weight loss (he lost nearly three pounds!) lung damage and brain damage from his body not getting enough oxygen.

I don’t know what that test would have resulted in had they performed it at birth, but I do know that research suggests that the test is accurate 99.9% of the time. Oh, how I wish they would have tested him earlier on.

While this test has certainly become more mainstream in birthing centers across the United States, it needs to be included in the standard testing for every birth in every state.

If you are expecting, I urge you to make sure that they test your baby before you leave the hospital, and don’t be afraid to be an advocate for pulse ox testing yourself.  I wish someone would have for me.