Our oldest son has a severe congenital heart defect, Truncus Arteriosus (type 2).  He is 9 years old now and getting ready to enter 4th grade.  When he had his most recent open heart surgery in August of 2015, we visited with a social worker at Children’s Mercy hospital.

During that most recent hospital stay, we were there for 6 days.  In on a Tuesday for pre-op, then surgery to replace his conduit on Wednesday, and home the following Tuesday.  While we were in the PICU, the cardiac social worker stopped by and asked “how is he doing?” shortly after they had stabilized his heart rhythm after a terrifying episode.

He was {finally} sleeping, and while we sat, we talked.  We talked about how difficult it was to get him stabilized, and how he was doing medically.  Then she asked me how I was doing.  Not too good, honestly. 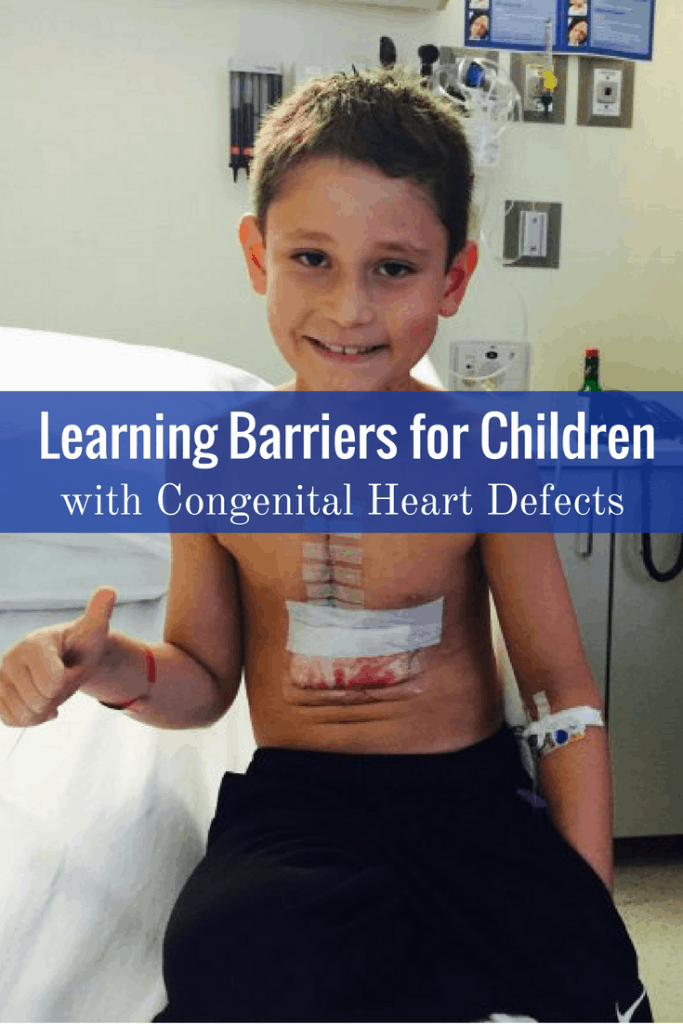 For a repeat surgery you go in thinking “I’m a veteran! I’ve got this.”

After his significant hospital stay his first go around (two open heart surgeries, one heart catheterization, 8 days on ECMO and being resuscitated twice) I was a nervous wreck.  We were there for nearly four months the first time.

Then she asked me how he was doing academically.  She sent us in a direction that I had no idea even existed: Cardiac Neuropsychology.

It has changed both our outlook and our lives, and if you are a heart family as well, it just might change everything.

Do you have a heart child? Is he/she school age? Do they struggle with different subjects including math and reading and more? Have you been told that he/she will need special education intervention in school?  You are not alone.  In fact, this is quite common in heart kids.

What IS happening during that time in pregnancy?

Lots of brain and organ development.

What is NOT happening during that time in pregnancy? The heart is not pumping efficiently, and thus not pumping enough oxygenated {healthy} blood to the brain and other organs while they are developing.  The brain is simply not getting the “food” needed to grow and to thrive.

Not only is the child’s organ development impeded by this altered blood flow, but studies have shown that children placed on heart-lung bypass have an increased risk of damage to the brain as well.

So, they have issues before birth that we may or may not know about, and then when they have open heart surgery to repair the defect in the heart, that may damage/diminish the function of the brain as well, mostly related to memory from what I understand.

We met with the Cardiac Neurodevelopmental team in Kansas City this January for extensive testing.  They tested his IQ against other children his age, had him complete multiple cognitive tests as well as reading comprehension tests etc.  While he is above his age level on visual-spacial problems, he is on the very low end for other subjects.

At first his school wanted to start a 504 plan for him.   After meeting with the team in Kansas City (also with a neurologist – and we are scheduled for another MRI of his brain) we have since met with his school and started a full-out Individualized Education Program (IEP) specifically to help him and to teach him the way that he learns.

His brain just doesn’t work the way other kids’ brains do.

He can’t learn the way they can.   Some parts of his brain were damaged simply by having the heart defect, then his multiple surgeries and the 8 days on ECMO (external heart and lung machine used as long-term bypass) sure didn’t help.

If you have a child with Congenital Heart Defects, I highly encourage you to inquire about this program at your next cardiology appointment.  Nothing but good can come of it, and I am so glad this program is available.  It has already changed our lives and our outlook.