One thing I would never wish on another parent?  Preparing a child for surgery.  Not even my worst enemy, and I’ve done it multiple times.

While ANY surgery regarding your child can be a harrowing experience, those that require hospitalization and IVs and breathing tubes and monitors? Well, those are simply scarier.  All parents are scared of the outcome, as there are always risks involved, but don’t forget to think about your other children’s perspectives as well.

Let me tell you a little story.

When I was eight years old, I broke my left arm at my best friend’s birthday party, cruising around the roller skating rink. I dutifully wore my cast for a couple of months and when we went to get it sawed off, there was me, me younger brother and my older sister, all three of us bawling like babies.  I was scared for me, and they were scared for me too.

That was just a cast for a broken arm!  No incisions, no blood draws, no tubes, no bandages… nothing.  Imagine how scary it must be for a young child to see their big or little brother laying in a hospital bed, hooked up to a breathing tube or an oxygen tube or IVs, bandages and more.

Sure, siblings hate each other at times.  I’d be worried if they didn’t.  But they also love each other too.  More than they realize.

When Caden had his most recent open heart surgery in August of 2015, the first thing he remembers afterward is being up and walking.  That was THREE entire days that he lost.  His little brother visited him but Caden does not remember that.

This isn’t to say that your child will have that length of memory loss, every patient and every procedure is different.  Chances are though, that it will be just as traumatic – or more so – for your other children as well.

When we found out that my dad would need open heart surgery a couple of weeks ago, I sat down with my boys separately and talked to them about the procedure, using Caden’s surgery as a reference.  Caden acted like it was no big deal, because he’s done it three times himself, I am sure.

My younger son on the other hand, he was shocked and worried, and scared for his Papa.  He asked me if I remembered how he cried when Caden had his surgery.  I nodded to indicate that I did remember.  Then he told me that he cried because he thought of all the ways he loved his brother.  And then he proceeded to tell me that there were only five reasons that he loves him.  Ha! Brothers.

The point is, he was scared. And he remembers being scared. If I could do things differently, I would have waited to bring him into the ICU to see his brother, and we didn’t take him back for this photo until the breathing tube was out and he was some-what awake. 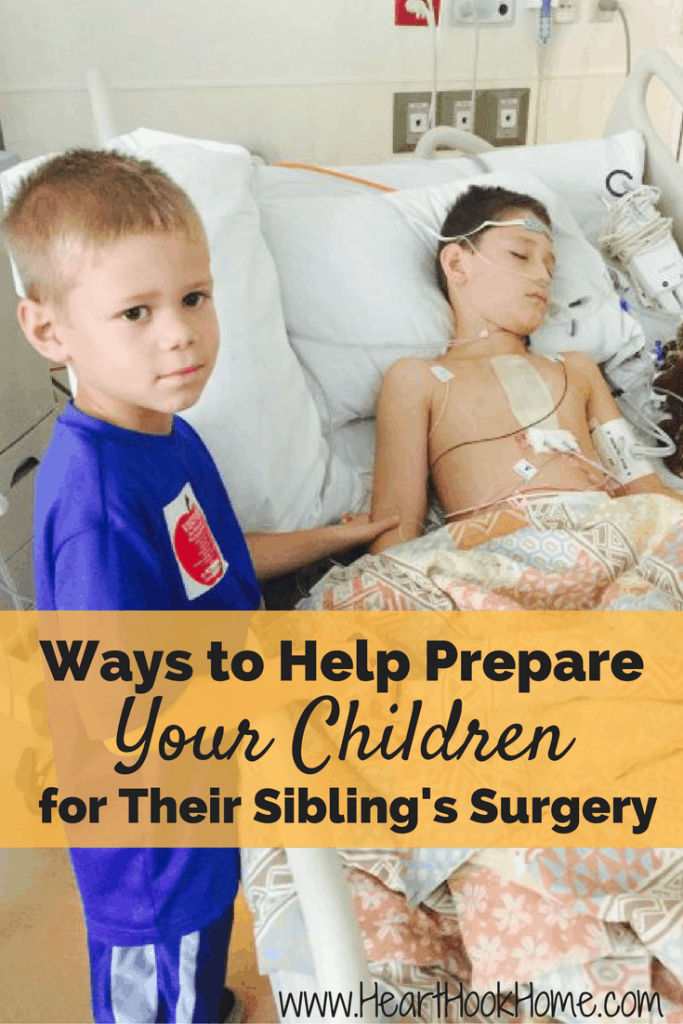 Ways to Help Prepare a Child for Their Sibling’s Surgery

Give plenty of attention

This can be difficult. We had the benefit of lots of help from our family during Caden’s most recent week-long hospital stay. Paul’s parents were wonderful in that they took our younger son out and about that afternoon – during the actual surgery – so that we could focus on the nurses and updates from the surgeon, and so that he was getting adequate attention as well.

Do not openly discuss the worst case scenario around your children.  Any of your children.  The mention of something going wrong or even the possibility of it is scary for a young child, let alone yourself.  Use words they understand, even when discussing as a group.

Whether that is you or your spouse taking turns or the grandparents or a trusted friend (that THEY trust as well!) they need to know that they are not being abandoned in favor of their sibling.

Give plenty of compliments and hugs

Reassurance is huge – for children and adults alike.  A hug and a kind word goes so very far in the grand scheme of things.

When ready, take all of the children to the play room and have family time. This helps to reiterate the fact that everything is OK, that things WILL go back to normal and that we are ALL a family. 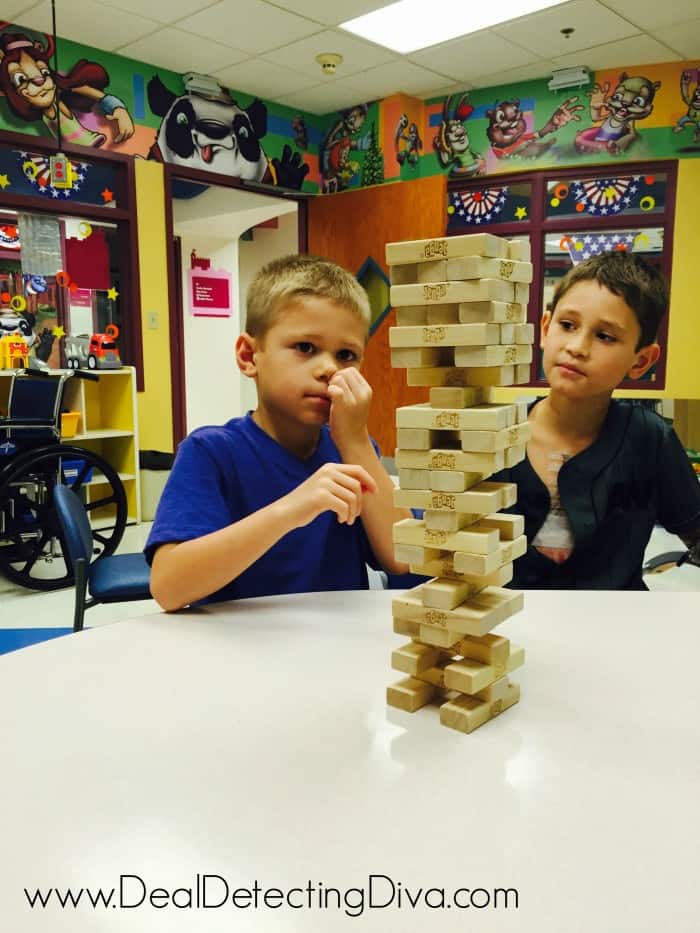 Let them help. He loved to push his brother around in the wheelchair when we went to visit the Navy Band for their performance, and he felt that he was contributing as well. 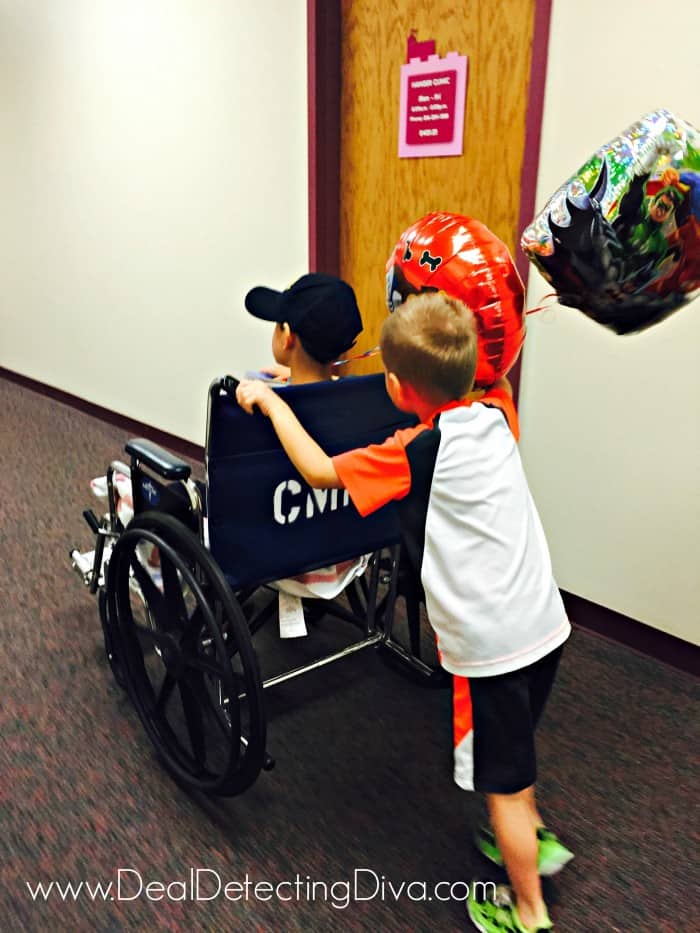 If your other children are not able to stay at the hospital, have them send letters or drawings. This will help them both, and reassure each other that they’ve got each other’s back.

Let them ask questions, and above all, let them know that everything will be okay.

Let them know what to expect

Ask the hospital if they have any stuffed animals that you could use to explain the recovery process to them.  Our hospital had a teddy bear that had bandages and IVs, so that we could show our younger son everything that his brother was hooked up to before actually taking him back.  This prepared him the most, I believe.

You know your children better than anyone does.  You make the decision on whether or not to bring your child to the hospital.  No one can tell you the “correct” thing to do.  Be mindful however, of every little thing that you say and how you react and how you incorporate them into this family experience.  Because this IS one big family experience.

Have any tips I missed?  Here are some more things I learned being the parent of a CHD child.