Wowie! If there’s one stitch I just love to look at, it’s the Diamond Stitch using Post Stitches. This stitch creates such amazing depth, texture, and visual appeal. Let’s learn how to crochet this gorgeous stitch today! 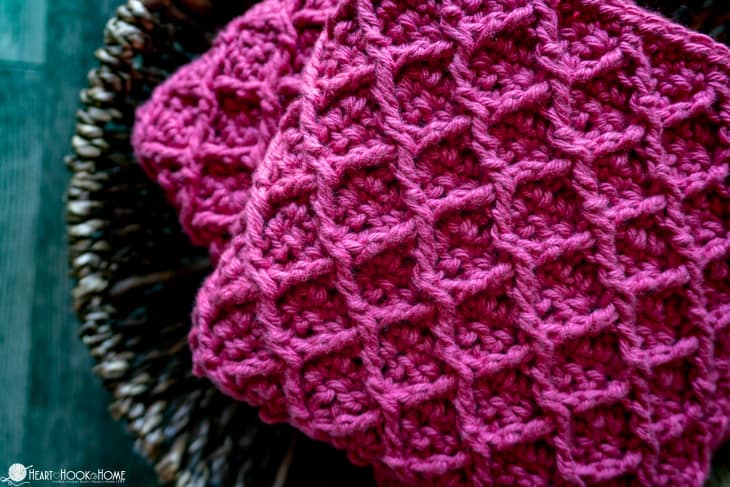 The Diamond Stitch uses a combination of double crochet rows alternated with post stitch rows. On the post stitch rows we arrange them in a way that form triangles that, when offset, look like diamonds. Absolutely GOREGOUS! 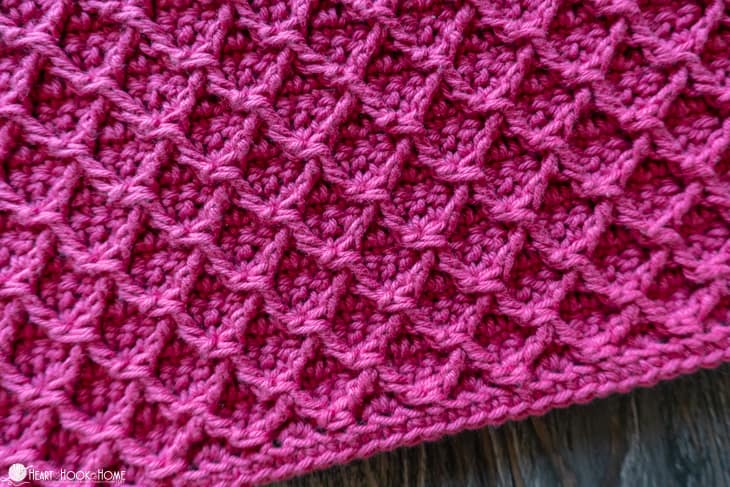 This stitch uses a four row repeat. Once we get the first three rows established, the rest is smooth sailing! The VIDEO tutorial below will help should you get stuck. 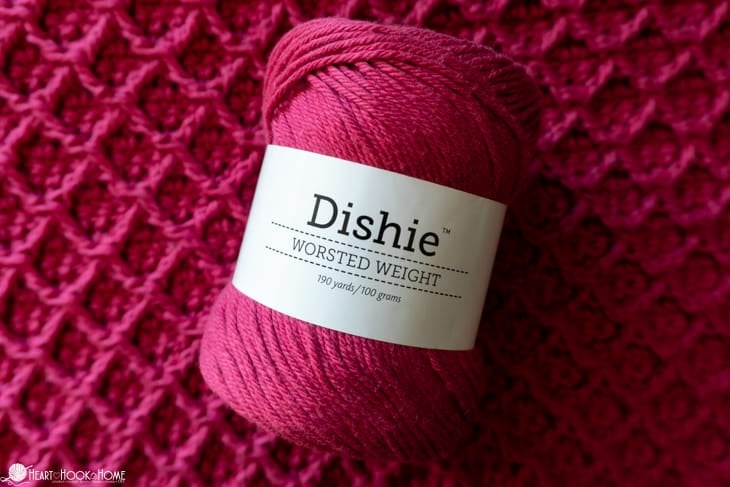 To start row 1, chain a multiple of 4 stitches + 3. Single crochet in the second chain from hook and in each chain to end.

Next you want to crochet a row of Double Crochet. Chain two, turn, and double crochet in each stitch to end. 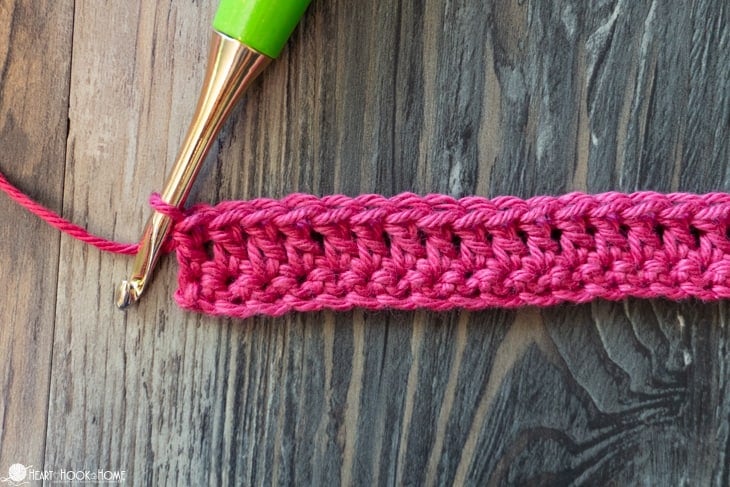 Now we are ready for the first Post Stitch row. This is perhaps the most difficult row of the entire stitch set. Remember that if you get stuck, the video below will help! 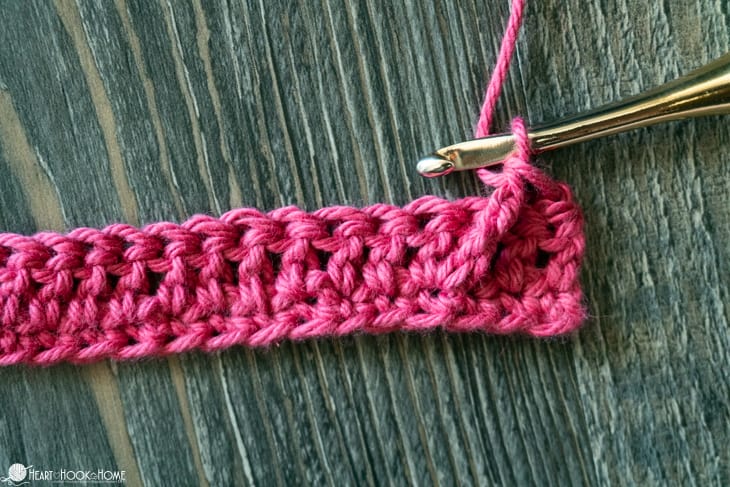 Chain one and turn. Fptr around the third stitch from row 1. Single Crochet in the next three stitches. (make sure to skip the stitch that the Fptr would have gone into!) 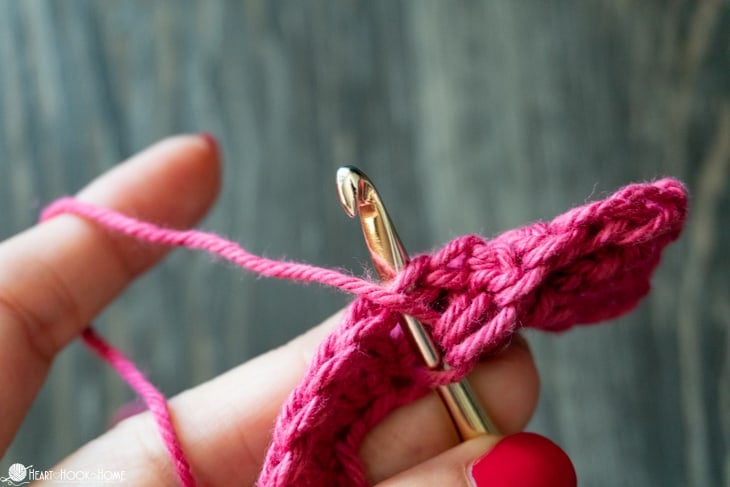 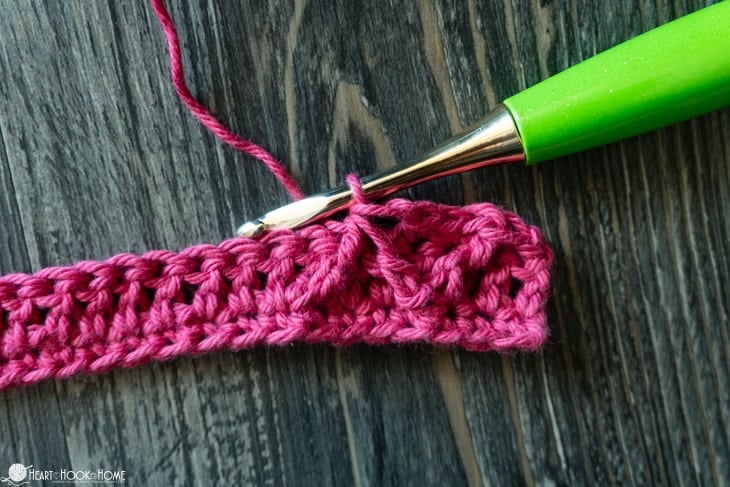 Fptr2tog (Front Post Treble Crochet Two Together) using the SAME stitch from row one that you just went into, then skip the next three stitches from row one and place the second half of the Fptr2tog in the fourth stitch. (see below for a step-by-step guide to this stitch and remember that if you get stuck, the video below will help!) 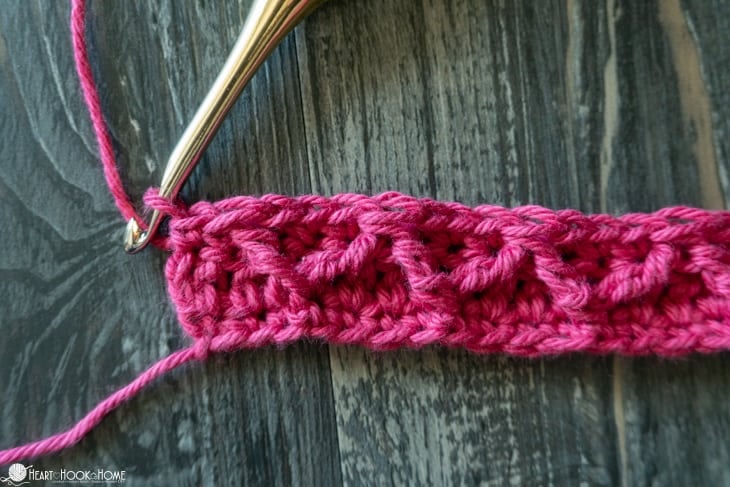 Repeat the step above until you have only two stitches remaining. Fptr around the same stitch you just went around from row one, then single crochet in the last stitch of the row.

Make a double crochet row. Chain two, turn, dc across. Now we are ready for another post stitch row. They get easier from here on out!

Chain one and turn, then single crochet in the first two stitches. This gets your hook directly above the bottom “peak” of the diamond/triangle. 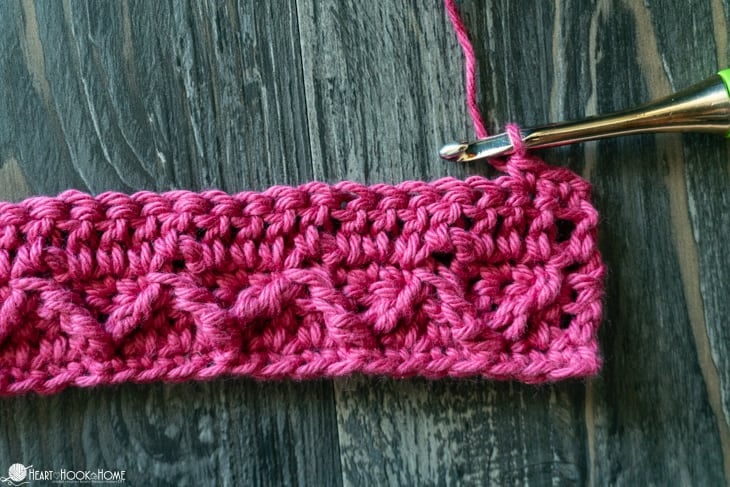 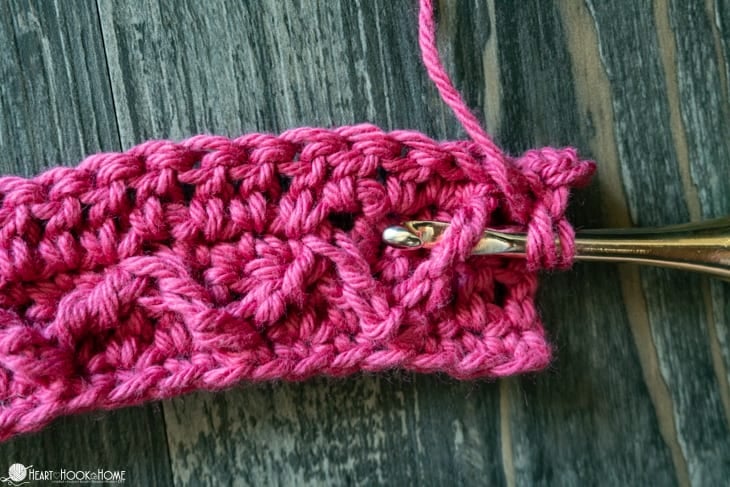 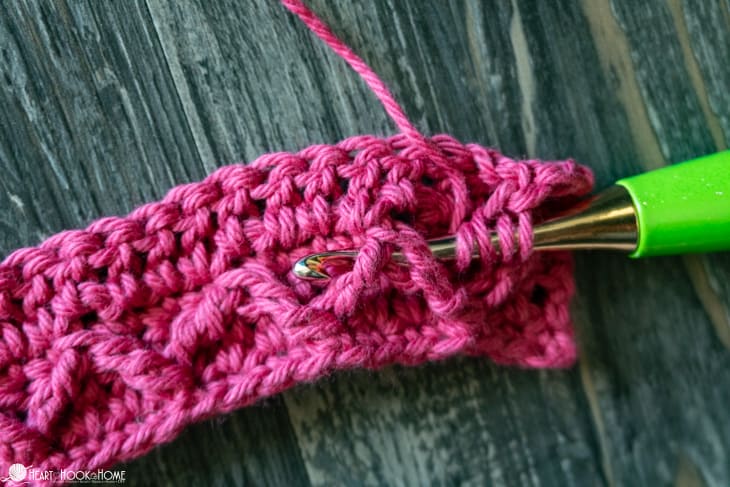 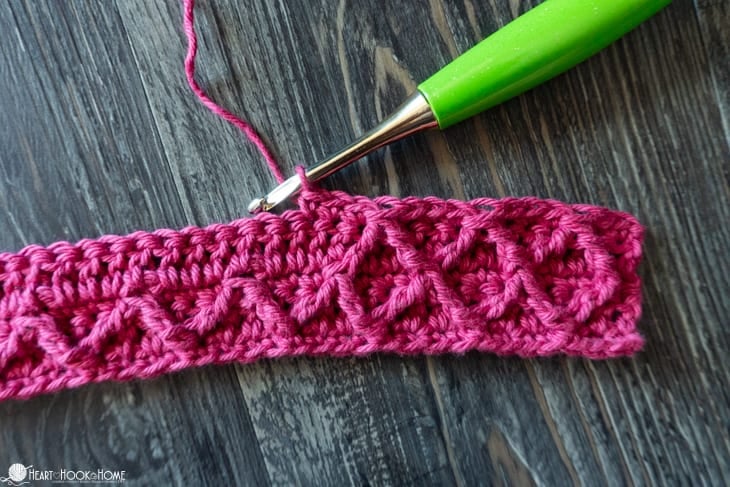 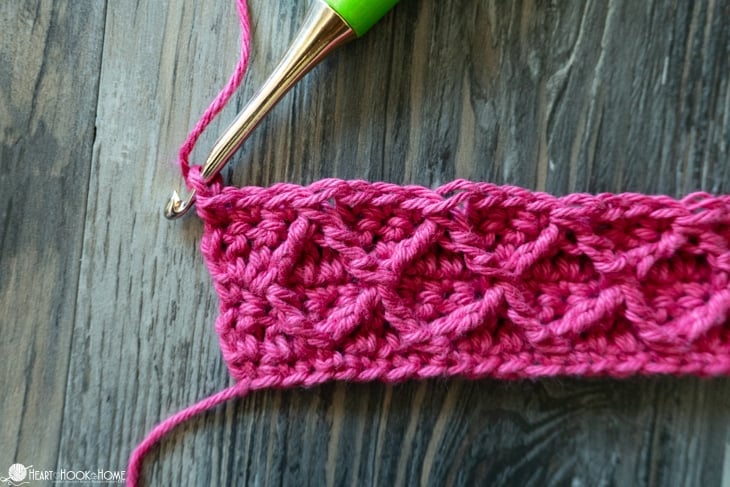 Make a double crochet row. Chain two, turn, dc across. Now we are ready for another post stitch row.

This time we will start the row with a Fptr instead of the two single crochets. This offsets the triangles, forming the diamond shape. Cool! 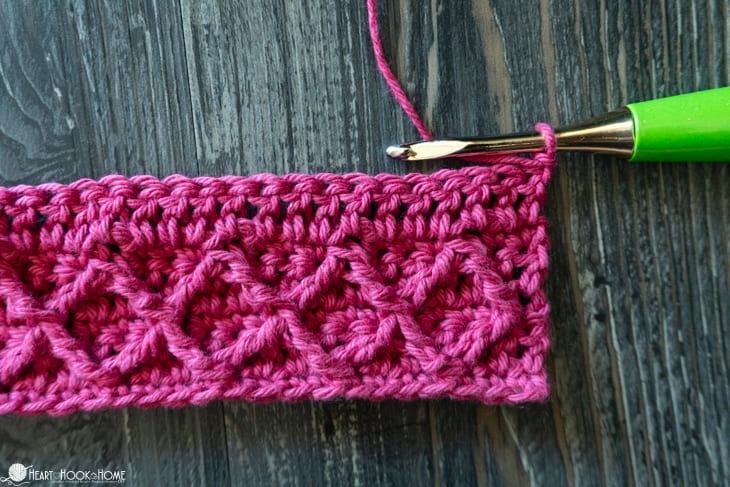 Make the first Fptr around the first “bundle” of posts. Single crochet in the next three stitches. 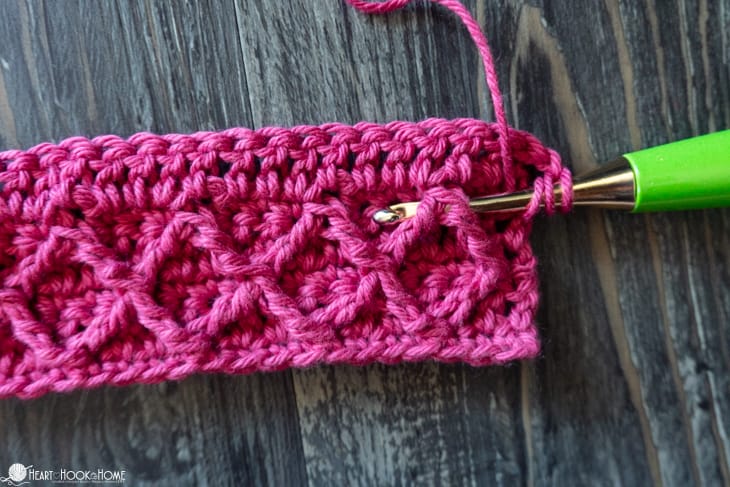 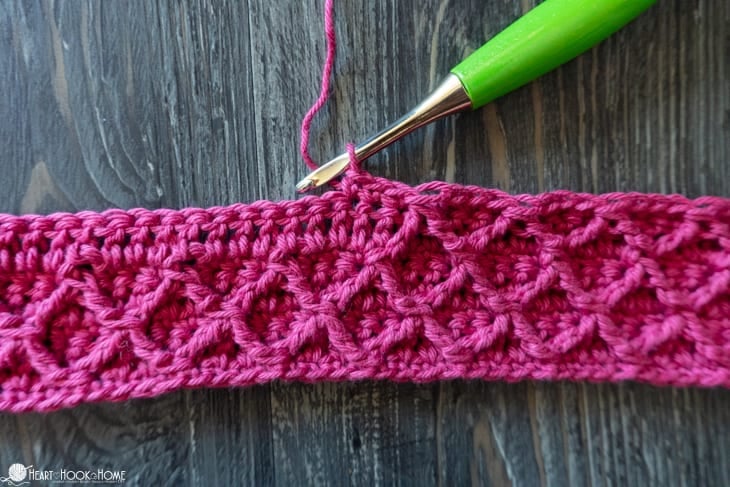 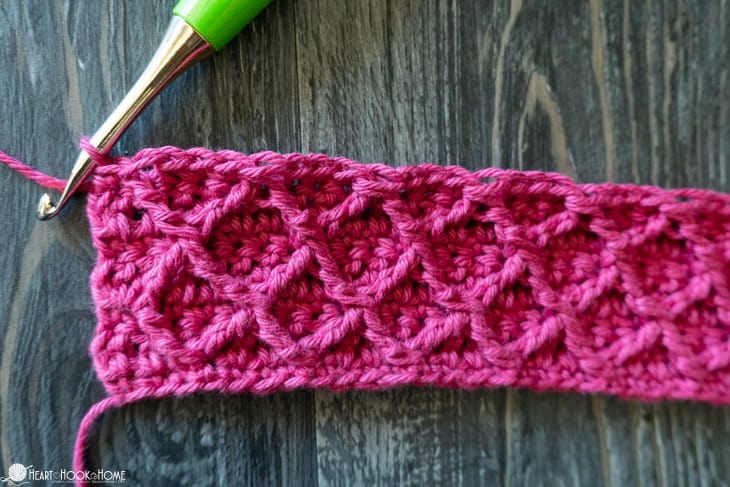 Start the next post stitch row with two single crochets. For the remainder of the stitch set, alternate the post stitch rows so that the diamonds are formed each row. Remember this is a four row repeat.

1. How many chains to start the Diamond Stitch?

To start you’ll need to chain a multiple of 4 stitches + 3.

2. Can I start with Foundation Single Crochet instead?

YES you can! If you are using a Foundation Single Crochet row to start, you’ll want a multiple of 4 stitches + 2.

3. How do I make the Front Post Treble Crochet Two Together? (Fptr2tog)

4. How do I end the Diamond Stitch pattern?

Continue crocheting in rows until the piece is as tall as you like. End on a row in which you start with two single crochets. (Not the row that starts with the Fptr)

I hope you enjoy crocheting this stitch as much as I do! It is interesting enough to keep your attention, but easy enough once you get the hang of it, too! ♥ 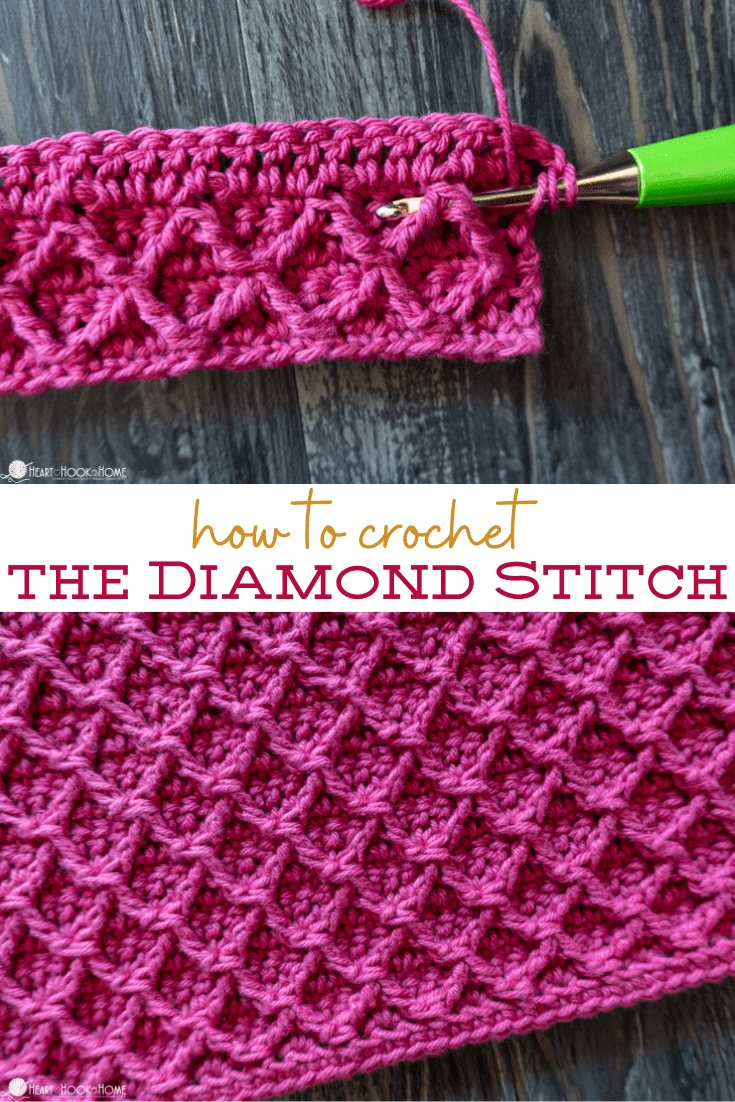 How to Crochet the Brick Stitch

How to Crochet the Wave Stitch